Oolagha is the Kennel Club Affix granted to myself in 1989, when I was showing Standard and Miniature Poodles.

I AM PROUD TO ANNOUNCE THAT OOLAGHA WAS THE FIRST KENNEL IN THE UNITED KINGDOM TO HAVE MADE UP FOUR POWDER PUFF CHAMPIONS INCLUDING ONE HOME BRED!!!

I have owned Chinese Cresteds since 1993 when I purchased my first dog from the Churrasco Kennels of Des & Di Jenkins.  Sadly the first one I purchased was not really good enough for the show ring and in 1994 along came Churrasco Cream Dream At Oolagha who was destined to become my first Champion.  Dream was awarded a total of 8 CC's and 6 RCC's, numerous BOB, Groups and BIS's at Open Show Level, including 3 BIS at Toy Dog Societies.  She was retired from the show ring in 2001 after winning Best Veteran In Show at Chinese Crested Dog Club Championship Show under Mr Foster Parker (Heathermount)

I have shown both hairless and powder puffs - but after a ten year break from the show ring since 2011 I have concentrated solely on the powder puffs.  I was lucky enough to be able to purchase a  puppy dog from Slovakia.  In 2012  he became my second champion -  Ch Poarott Isaac Mizrahi At Oolagha (Imp Svk) with 4 CC's all awarded by breed specialists, Bruce Jackson (Brusko), Stuart Payne (Habiba), Robert Dunlop (Habiba) and Janet Knowles (Jhanchi) and 1 RCC award by well known all rounder Peter Jolley.  Izzy has produced one Champion, one CC winner, two RCC winners, and one JW winner to date.

In 2016 my new addition to my show team is Jamming's Exclusive To Oolagha (Int Ch Jack Sparrow Poarott x Jamming's A Little Luv Luv) from my good friends Lella & Samu Wikstrom in Finland. Elton is co-owned with Gwenllian Rees (Parcauwen). I am pleased to announce that Elton gained his first CC with BOB at UK Toy Dog 2018 under breed specialist Christine Hinton (Cheeswood).  Elton was awarded RCC at Three Counties under breed specialist Cherry Gwynne (Chezic).  Elton was  shown sparingly during 2019 and at his first show of the year was awarded the RCC by breed specialist David Lodge (Valdajenlo) followed by another RCC at South Wales under breed specialist Alexandra Forth (Omegaville).  Unfortunately following Covid and  due to an extensive dental in 2021 Elton had to be retired from the ring.

In May 2019 Am Ch Halcyon Lady Luck - aka Lucy - was entrusted to me  by Tracey Maigne in Florida, USA, to be shown and handled by me in the UK.  Lucy is a sweetie and I hope to do well with her.  Lucy qualified for Crufts at her first show in the UK, and gained her stud book number in October 2019.  Lucy will be shown selectively by myself in 2022.  Lucy gained her 1st CC at Chinese Crested Club of GB 2021 under breed specialist Diana Rich (Solsplash) at her first show after lockdown.

In March 2022 and a suprise new arrival at Oolagha - VanHasta Aanya Moonstone With Oolagha - to be shown in partnership with Gwen and her breeder, Martina Saldanha.  So looking forward to campaigning her at selected shows in the future.

Born in February 2022 Jamming's Exclusive To Oolagha x Parcauwen Lunar Eclipse With Oolagha produced three puppies, two boys and one girl.  The little girl,  Ayla (Oolagha Kristol Ayla) will be shown exclusively by myself and Gwen when she is old enough!!

All my dogs have been fully health tested for all testable diseases, PRA prcd, PRA rcd3, PLL, DM, and vWD - all tested by DNA.  All my dogs are fed on Nurtriment Raw Food.

If you have any questions or wish to have any further information about either my  dogs or Chinese Cresteds in general please contact me via email: 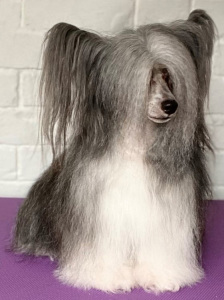 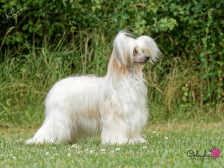